Once again we are proud to present our annual water quality report covering the period between January 1 and December 31, 2016. In a matter of only a few decades, drinking water has become exponentially safer and more reliable than at any other point in human history. Our exceptional staff continues to work hard every day—at any hour—to deliver the highest-quality drinking water without interruption. Although the challenges ahead are many, we feel that by relentlessly investing in customer outreach and education, new treatment technologies, system upgrades, and training, the payoff will be reliable, high-quality tap water delivered to you and your family.

Some people may be more vulnerable to contaminants in drinking water than the general population. Immunocompromised persons such as persons with cancer undergoing chemotherapy, persons who have undergone organ transplants, people with HIV/AIDS or other immune system disorders, some elderly, and infants may be particularly at risk from infections. These people should seek advice about drinking water from their health care providers. The U.S. EPA/ CDC (Centers for Disease Control and Prevention) guidelines on appropriate means to lessen the risk of infection by Cryptosporidium and other microbial contaminants are available from the Safe Drinking Water Hotline at 800.426.4791 or http://water.epa. gov/drink/hotline.

For more information about this report, or for any questions relating to your drinking water, please call Louis Wooten, Engineering, at 304.255.5121, Ext. 113. You can download a copy of this report here.

Substances That Could Be in Water

To ensure that tap water is safe to drink, the U.S. EPA prescribes regulations limiting the amount of certain contaminants in water provided by public water systems. U.S. Food and Drug Administration regulations establish limits for contaminants in bottled water, which must provide the same protection for public health. Drinking water, including bottled water, may reasonably be expected to contain at least small amounts of some contaminants. The presence of these contaminants does not necessarily indicate that the water poses a health risk.

The sources of drinking water (both tap water and bottled water) include rivers, lakes, streams, ponds, reservoirs, springs, and wells. As water travels over the surface of the land or through the ground, it dissolves naturally occurring minerals, in some cases, radioactive material, and substances resulting from the presence of animals or from human activity. Substances that may be present in source water include:

Microbial Contaminants, such as viruses and bacteria, which may come from sewage treatment plants, septic systems, agricultural livestock operations, or wildlife;

Inorganic Contaminants, such as salts and metals, which can be naturally occurring or may result from urban stormwater runoff, industrial or domestic wastewater discharges, oil and gas production, mining, or farming;

Pesticides and Herbicides, which may come from a variety of sources such as agriculture, urban stormwater runoff, and residential uses;

Organic Chemical Contaminants, including synthetic and volatile organic chemicals, which are by-products of industrial processes and petroleum production and may also come from gas stations, urban stormwater runoff, and septic systems;

Radioactive Contaminants, which can be naturally occurring or may be the result of oil and gas production and mining activities.

If present, elevated levels of lead can cause serious health problems, especially for pregnant women and young children. Lead in drinking water is primarily from materials and components associated with service lines and home plumbing. We are responsible for providing high-quality drinking water, but cannot control the variety of materials used in plumbing components. When your water has been sitting for several hours, you can minimize the potential for lead exposure by flushing your tap for 30 seconds to 2 minutes before using water for drinking or cooking. If you are concerned about lead in your water, you may wish to have your water tested. Information on lead in drinking water, testing methods, and steps you can take to minimize exposure is available from the Safe Drinking Water Hotline or at www.epa.gov/lead.

How Is My Water Treated and Purified?

Where Does My Water Come From?

Beckley Water Company customers are fortunate because we enjoy an abundant water supply from two sources. The Glade Creek Water Treatment Plant draws surface water from the Glade Creek Reservoir, which holds about 1.3 billion gallons of water. Customers in the area south of Piney Creek receive water solely from the Glade Creek Water Treatment Plant. Our second water source is ground water from an entrapped subterranean pool located about 275 feet below the surface. The Sweeneysburg Water Treatment Plant was constructed in 1993 to draw from this underground water supply. This pool holds about 1 to 1.5 billion or more gallons and is constantly being replenished from various underground sources. Combined, our treatment facilities provide roughly 3.5 billion gallons of clean drinking water every year. Our water supply is part of the Lower New Watershed, which covers an area of roughly 692 square miles around Beckley. Forested lands cover most (98%) of our watershed. To learn more about our watershed on the Internet, go to U.S. EPA’s Surf Your Watershed at www.epa.gov/surf.

The most common signs that your faucet or sink is affecting the quality of your drinking water are discolored water, sink or faucet stains, a buildup of particles, unusual odors or tastes, and a reduced flow of water. The solutions to these problems may be in your hands.
Kitchen Sink and Drain
Hand washing, soap scum buildup, and the handling of raw meats and vegetables can contaminate your sink. Clogged drains can lead to unclean sinks and backed-up water in which bacteria (e.g., pink and black slime) can grow and contaminate the sink area and faucet, causing a rotten egg odor. Disinfect and clean the sink and drain area regularly. Also, flush regularly with hot water.
Faucets, Screens, and Aerators
Chemicals and bacteria can splash and accumulate on the faucet screen and aerator, which are located on the tip of faucets and can collect particles like sediment and minerals, resulting in a decreased flow from the faucet. Clean and disinfect the aerators or screens on a regular basis.
Check with your plumber if you find particles in the faucet screen as they could be pieces of plastic from the hot water heater dip tube. Faucet gaskets can break down and cause black, oily slime. If you find this slime, replace the faucet gasket with a higher-quality product. White scaling or hard deposits on faucets and shower heads may be caused by hard water or water with high levels of calcium carbonate. Clean these fixtures with vinegar or use water softening to reduce the calcium carbonate levels for the hot water system.
Water Filtration and Treatment Devices
A smell of rotten eggs can be a sign of bacteria on the filters or in the treatment system. The system can also become clogged over time, so regular filter replacement is important. (Remember to replace your refrigerator filter!)

Our water is monitored for many different kinds of contaminants on a very strict sampling schedule. The information below represents only those substances that were detected; our goal is to keep all detects below their respective maximum allowed levels. The State allows us to monitor for certain substances less often than once per year because the concentrations of these substances do not change frequently. In these cases, the most recent sample data are included, along with the year in which the sample was taken. 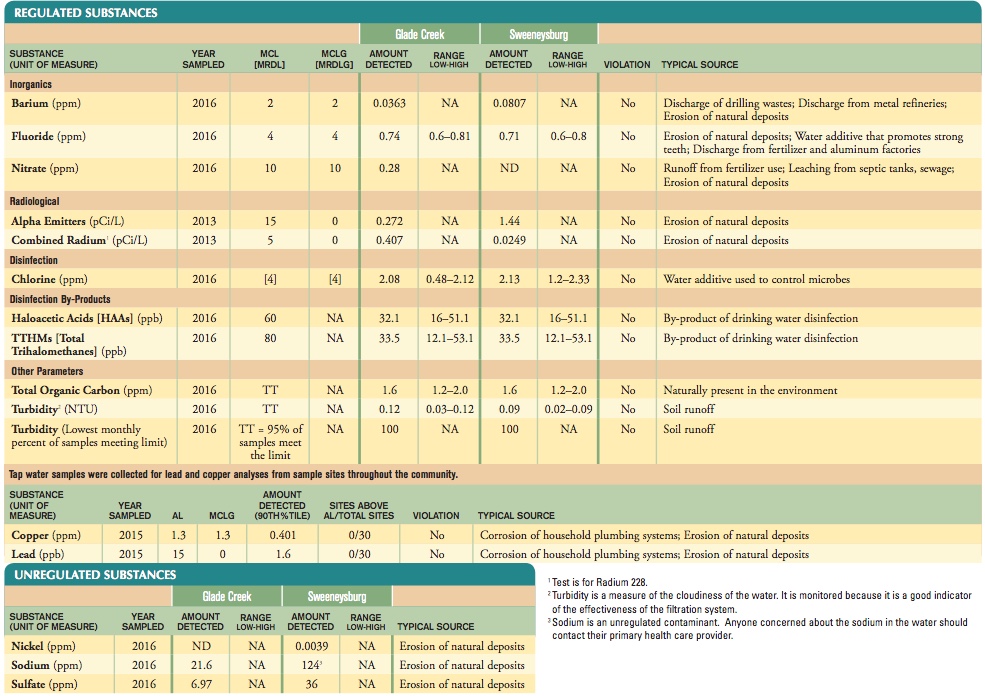 AL (Action Level): The concentration of a contaminant which, if exceeded, triggers treatment or other requirements which a water system must follow.

LRAA (Locational Running Annual Average): The average of sample analytical results for samples taken at a particular monitoring location during the previous four calendar quarters. Amount Detected values for TTHMs and HAAs are reported as LRAAs.

MCL (Maximum Contaminant Level): The highest level of a contaminant that is allowed in drinking water. MCLs are set as close to the MCLGs as feasible using the best available treatment technology.

MCLG (Maximum Contaminant Level Goal): The level of a contaminant in drinking water below which there is no known or expected risk to health. MCLGs allow for a margin of safety.

MRDLG (Maximum Residual Disinfectant Level Goal): The level of a drinking water disinfectant below which there is no known or expected risk to health. MRDLGs do not reflect the benefits of the use of disinfectants to control microbial contaminants.

NTU (Nephelometric Turbidity Units): Measurement of the clarity, or turbidity, of water. Turbidity in excess of 5 NTU is just noticeable to the average person.

pCi/L (picocuries per liter): A measure of radioactivity.

ppb (parts per billion): One part substance per billion parts water (or micrograms per liter).

ppm (parts per million): One part substance per million parts water (or milligrams per liter).

TT (Treatment Technique): A required process intended to reduce the level of a contaminant in drinking water.

Looking to pay your bill online?