Matthew W. Stanley
President,CEO and
Chairman of the Board
Beckley Water Company

We are once again pleased to present our annual water quality report covering all testing performed
between January 1 and December 31, 2019. Over the years, we have dedicated ourselves to
producing drinking water that meets all state and federal standards. We continually strive to adopt new
methods for delivering the best quality drinking water to you. As new challenges to drinking water safety
emerge, we remain vigilant in meeting the goals of source water protection, water conservation and community education.

Thank you, for allowing us the opportunity to serve you and your family. Please remember that we are always available should you ever have any questions or concerns about your water. After all, well-informed
customers are our best allies.

Some people may be more vulnerable to contaminants in drinking water than the general population. Immunocompromised persons such as persons with cancer undergoing chemotherapy, persons who have undergone organ transplants, people with HIV/AIDS or other immune system disorders, some elderly, and infants may be particularly at risk from infections. These people should seek advice about drinking water from their health care providers. The U.S. EPA/ CDC (Centers for Disease Control and Prevention) guidelines on appropriate means to lessen the risk of infection by Cryptosporidium and other microbial contaminants are available from the Safe Drinking Water Hotline at 800.426.4791 or http://water.epa. gov/drink/hotline.

For more information about this report, or for any questions relating to your drinking water, please call Louis Wooten, Superintendent, at (304) 255-5121, ext. 113. You can download a copy of this report here.

Substances That Could Be in Water

To ensure that tap water is safe to drink, the U.S. EPA prescribes
regulations limiting the amount of certain contaminants in
water provided by public water systems. U.S. Food and Drug
Administration regulations establish limits for contaminants in
bottled water, which must provide the same protection for public
health. Drinking water, including bottled water, may reasonably be
expected to contain at least small amounts of some contaminants.
The presence of these contaminants does not necessarily indicate
that the water poses a health risk.

The sources of drinking water (both tap water and bottled water)
include rivers, lakes, streams, ponds, reservoirs, springs, and wells.
As water travels over the surface of the land or through the ground,
it dissolves naturally occurring minerals, in some cases, radioactive
material, and substances resulting from the presence of animals
or from human activity. Substances that may be present in source
water include:

Microbial Contaminants, such as viruses and bacteria, which may
come from sewage treatment plants, septic systems, agricultural
livestock operations, or wildlife; Inorganic Contaminants, such as
salts and metals, which can be naturally occurring or may result
from urban storm-water runoff, industrial or domestic wastewater
discharges, oil and gas production, mining, or farming; Pesticides
and Herbicides, which may come from a variety of sources
such as agriculture, urban storm-water runoff, and residential
uses; Organic Chemical Contaminants, including synthetic and
volatile organic chemicals, which are by-products of industrial
processes and petroleum production and may also come from gas
stations, urban storm-water runoff, and septic systems; Radioactive
Contaminants, which can be naturally occurring or may be the
result of oil and gas production and mining activities.

If present, elevated levels of lead can cause serious health problems, especially for pregnant women and young children. Lead in drinking water is primarily from materials and components associated with service lines and home plumbing. We are responsible for providing high-quality drinking water, but we cannot control the variety of materials used in plumbing components. When your water has been sitting for several hours, you can minimize the potential for lead exposure by flushing your tap for 30 seconds to 2 minutes before using water for drinking or cooking. If you are concerned about lead in your water, you may wish to have your water tested. Information on lead in drinking water, testing methods, and steps you can take to minimize exposure is available from the Safe Drinking Water Hotline at (800) 426-4791 or at www.epa.gov/safewater/lead. 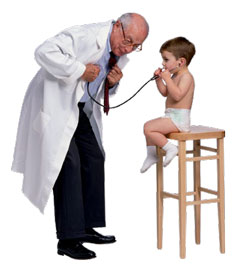 Some people may be more vulnerable to contaminants in drinking water than the general population. Immunocompromised persons such as persons with cancer undergoing chemotherapy, persons who have undergone organ transplants, people with HIV/AIDS or other immune system disorders, some elderly, and infants may be particularly at risk from infections. These people should seek advice about drinking water from their health care providers. The U.S. EPA/CDC (Centers for Disease Control and Prevention) guidelines on appropriate means to lessen the risk of infection by Cryptosporidium and other microbial contaminants are available from the Safe Drinking Water Hotline at (800) 426-4791 or http://water.epa.gov/drink/hotline.

Where Does My Water Come From?

Beckley Water Company customers are fortunate because we enjoy an abundant water supply from two sources. The Glade Creek Water Treatment Plant draws surface water from the Glade Creek Reservoir, which holds about 1.3 billion gallons of water. Customers in the area south of Piney Creek receive water solely from the Glade Creek Water Treatment Plant. Our second water source is groundwater from an entrapped subterranean pool located about 275 feet below the surface. The Sweeneysburg Water Treatment Plant was constructed in 1993 to draw from this underground water supply. This pool holds about 1 to 1.5 billion or more gallons and is constantly being replenished from various underground sources. Combined, our treatment facilities provide roughly 3.5 billion gallons of clean drinking water every year. Our water supply is part of the Lower New Watershed, which covers an area of roughly 692 square miles around Beckley. Forested lands cover most (98%) of our watershed. To learn more about our watershed on the Internet, go to U.S. EPA’s Surf Your Watershed at www. epa.gov/surf.

Thanks in part to aggressive marketing, the bottled water industry has successfully convinced us all that water purchased in bottles is a healthier alternative to tap water. However, according to a four-year study conducted by the Natural Resources Defense Council, bottled water is not necessarily cleaner or safer than most tap water. In fact, about 25 percent of bottled water is actually just bottled tap water (40 percent according to government estimates).

The Food and Drug Administration is responsible for regulating bottled water, but these rules allow for less rigorous testing and purity standards than those required by the U.S. EPA for community tap water. For instance, the high mineral content of some bottled waters makes them unsuitable for babies and young children. Further, the FDA completely exempts bottled water that is packaged and sold within the same state, which accounts for about 70 percent of all bottled water sold in the United States.

People spend 10,000 times more per gallon for bottled water than they typically do for tap water. If you get your recommended eight glasses a day from bottled water, you could spend up to $1,400 annually. The same amount of tap water would cost about 49 cents. Even if you installed a filter device on your tap, your annual expenditure would be far less than what you would pay for bottled water.

For a detailed discussion on the NRDC study results, check out their website at https://goo.gl/ Jxb6xG

Our water is monitored for many different kinds of substances on a very strict sampling schedule. And, the water we deliver must meet specific health standards. Here, we only show those substances that were detected in our water (a complete list of all our analytical results is available upon request). Remember that detecting a substance does not mean the water is unsafe to drink; our goal is to keep all detects below their respective maximum allowed levels. The State recommends monitoring for certain substances less than once per year because the concentrations of these substances do not change frequently. In these cases, the most recent sample data are included, along with the year in which the sample was taken. 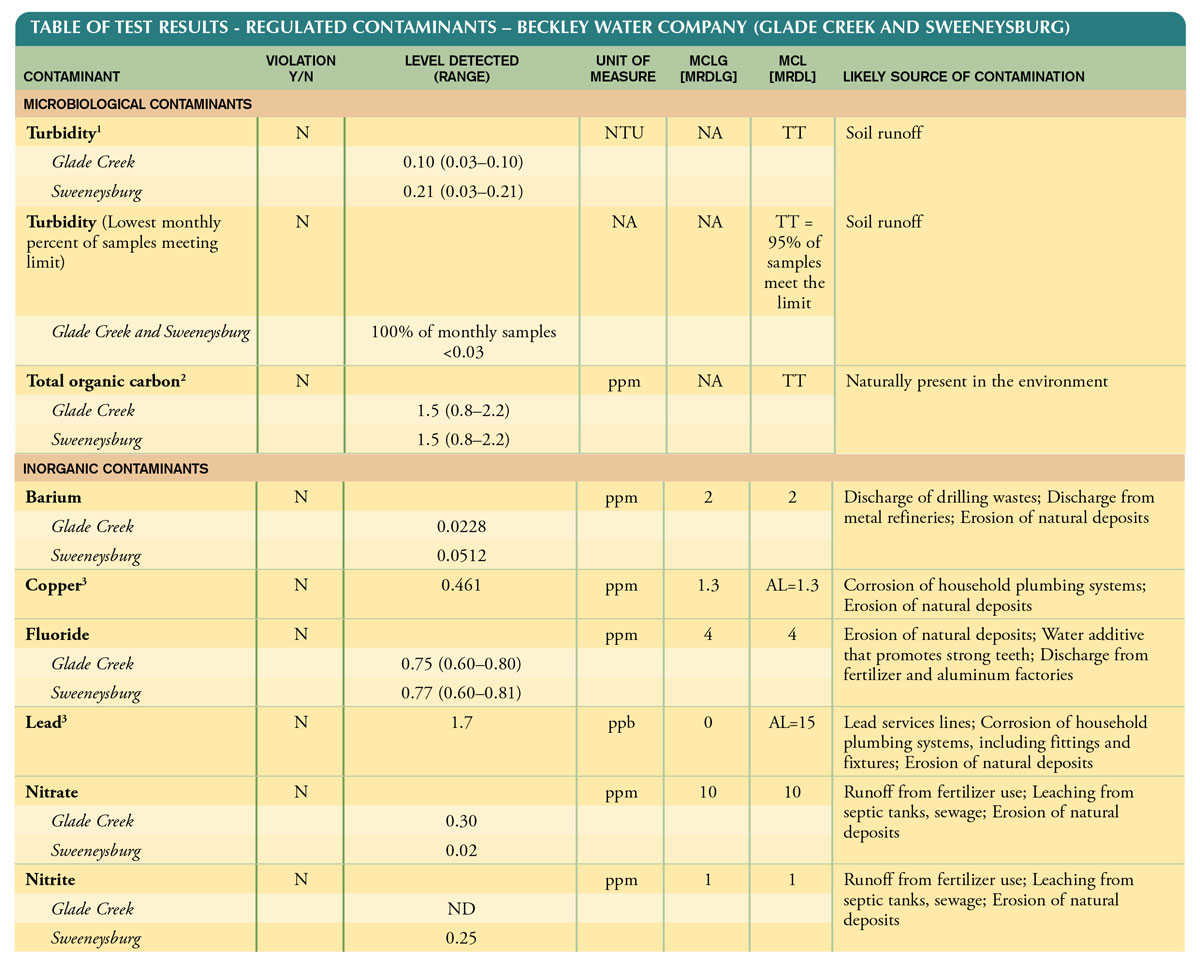 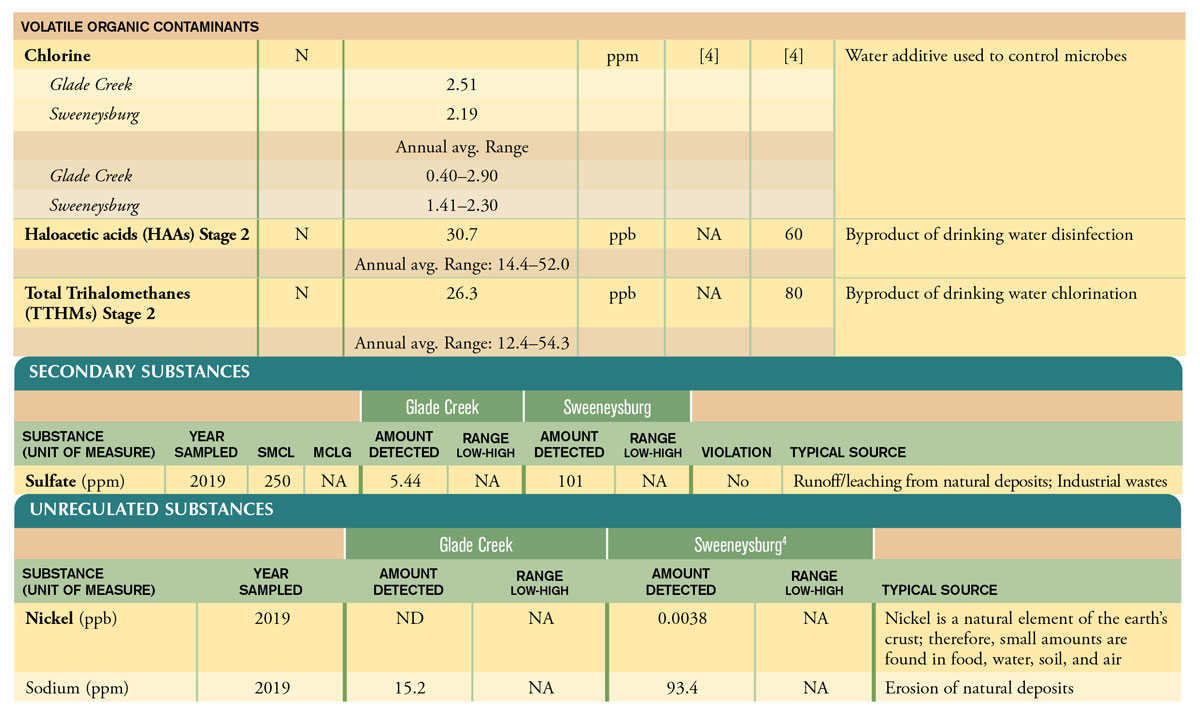 1 Turbidity is a measure of the cloudiness of the water. It is monitored because it is a good indicator of the effectiveness of the filtration system.

4 Sodium is an unregulated contaminant. Sweeneysburg’s sodium level exceeds the guidance level MCL. If you have a concern over sodium, please contact your primary health care provider.

AL (Action Level): The concentration of a contaminant which, if exceeded, triggers treatment or other requirements which a water system must follow.

LRAA (Locational Running Annual Average): The average of sample analytical results for samples taken at a particular monitoring location during the previous four calendar quarters. Amount Detected values for TTHMs and HAAs are reported as the highest LRAAs.

MCL (Maximum Contaminant Level): The highest level of a contaminant that is allowed in drinking water. MCLs are set as close to the MCLGs as feasible using the best available treatment technology.

MCLG (Maximum Contaminant Level Goal): The level of a contaminant in drinking water below which there is no known or expected risk to health. MCLGs allow for a margin of safety.

MRDLG (Maximum Residual Disinfectant Level Goal): The level of a drinking water disinfectant below which there is no known or expected risk to health. MRDLGs do not reflect the benefits of the use of disinfectants to control microbial contaminants.

ND (Not detected): Indicates that the substance was not found by
laboratory analysis.

NTU Nephelometric Turbidity Units): Measurement of the clarity,
or turbidity, of water. Turbidity in excess of 5 NTU is just noticeable to
the average person.

ppb (parts per billion): One part substance per billion parts water (or
micrograms per liter).

ppm (parts per million): One part substance per million parts water
(or milligrams per liter).

SMCL (Secondary Maximum Contaminant Level): These standards
are developed to protect aesthetic qualities of drinking water and are not health based.

TT (Treatment Technique): A required process intended to reduce the
level of a contaminant in drinking water.